Unfortunately, tiny errors, typos, and the need for tweaks & amendments are all an inevitable part of publishing hard-copy books. Virtually all attempts to reduce them to zero, fail. No matter how many eyes pass over the text it is still extremely unusual for a book to go without the need for modifications in future printings or editions. The AP Chemistry Crash Course is no exception. As such it will be necessary to make tiny changes to the book over time in order for the product to improve.

You may think this happens via a new edition, and that a 4th Edition might be on the way soon. However, that’s not quite how it works! A entirely new edition of the book is unlikely to be produced before there is some major change in the AP exam. Given that we had one such huge overhaul in May of 2019 (when the current, 3rd Edition superceded the now obsolete 2nd Edition), a new edition of the book is unlikely anytime soon. However, what does happen is that popular books get re-printed as the current supply runs out. What we can do is to make changes between re-prints of the current (3rd) Edition, and slowly, over time, the books that have those improvements will make it into the supply chain.

As such, when you read some of the changes that I list below, you may already be in possession of a hard-copy book that has incorporated them. On the other hand, you may not – it just depends on what stage the publisher has reached in terms of dealing with the tweaks, and which re-print you happen to have in your possession. Either way, this page should prove to be a useful companion to the book.

In each edition that I am responsible for (2nd and 3rd), I will list some of my thoughts (and those pointed out by others) that will hopefully move the original printing ever-increasingly toward ‘perfection’! Please don’t hesitate to contact me if you find something that requires a tweak and I will happily consider its inclusion here (and in future re-prints). 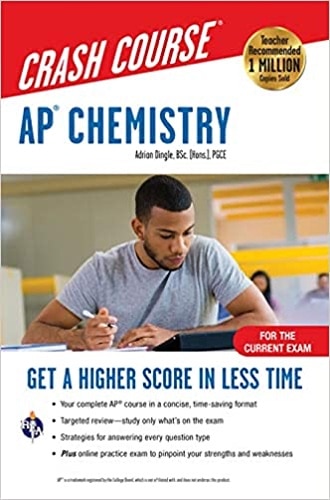 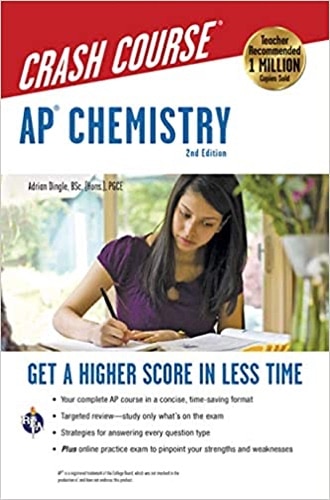 Notes for each Edition are given below

On 06/02/2022 the College Board announced that the MCQ section of the AP Chemistry exam in 2023 forward will allow calculators, and they issued an updated CED effective Fall 2022. The MCQ portion of the exam will now contain more authentic data rather than data being forced to meet non-calculator requirements. There are obvious consequences for the Crash Course book and the online exam, and I am currently working on changes to the materials. Stay tuned.

There’s a unique problem with this partcular Edition. It was originally written prior to May of 2014, i.e., prior to the new exam actually coming into being and being released. This meant that when the new, 2014-2019 exams actually hit the publioc domain, they brought with them a clearer focus on certain topics than was available when the 2nd Edition was initially written.

Q2 (and then reflected in the the subsequent answer on p 20) should read;

The simulated PES plot in the book is ‘correct’, but at the time of writing the College Board had NOT released any definitive, example material (subsequently they did release information, but this was 6 months after the new course had started in most schools, and close to a year after my deadline to finish the book).

As a result, we were all guessing as to how PES spectra would ultimately be presented (no sample material was available) and the #1 source of information on the web at the time was the Arizona State University resource that had (as still does have), the axis ascending and tiered. Since the first printing of the book, we have now learned that it is most likely that the x-axis will be reversed, with the scale descending (rather than ascending), from left to right, to allow the order of the electronic configuration (1s2 2s2 2p6 3s1) to be read from left to right as shown below.

The original (first) printing of the 2nd Edition shows the x-axis scale ascending.