When composing this post about the College Board Webinar relating to PES in February of this year, I wrote;

(i) Unlike in the simulated spectra, where the intensity (height) of the peak directly relates to the number of electrons in a given orbital, because the abundance of the elements in a mixture will not be identical to one another, we can see different height peaks for obitals that actually have the SAME number of electrons as one another. This is obviously problematic, and is frankly getting way beyond what the AP is likely to ask (IMO), so I feel that it is likely, as the presentation suggests, that there is a specific consequence, namely…

(ii) …that the only questions that will come from these type of spectra (real), if they are presented, will be ones that concentrate on the relative positions of the peaks on the x-axis, i.e., the the differences between the number of protons of the various atoms, and hence the relative size of the binding energies, and not the relative numbers of electrons in any one orbital (the height of the peaks). We’ll see – maybe!

I (like other Teachers with audited courses), have now seen evidence to suggest that (so far) my initial guess was correct, BUT the very fact that real spectra may be presented on the exam, has still led me to adjusting my UNIT 1 notes to include a brief discussion of such spectra. For example, I have added an explanation of the following spectrum to the notes (which will be published for subscribers tomorrow) and I suspect that additional questions will be added to worksheets in due course. 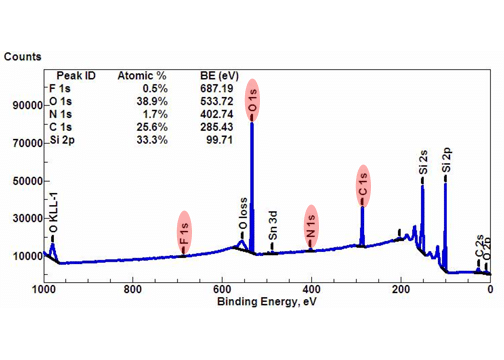