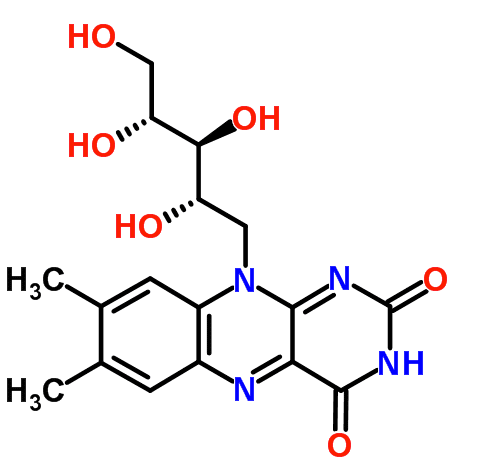 Having written this, this and this before, you’ll know that I like to read (and write) about beery molecules. As such, I was intrigued to receive an email from Kate Lajtha at Oregon State University who sent me the photograph below, of one of her student’s sporting an organic chemistry based shirt that appeared to be (at least from the label), beer related. I am a sucker for the random appearance of organic molecules in pop culture, and when they are beer related I’m even more intrigued! 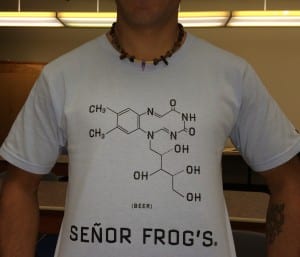 It turns out that this one is a lot simpler to decipher than some of the others that I have encountered simply because it was complete, and almost completely accurately depicted – (there is a bond missing between two C atoms in the 10 membered heterocyclic ring that would split it into two, six membered rings) – which is not always the case! A straightforward counting of the atoms, followed by a visit to chemspider.com, gave me all I needed to know. Not being much of a biochemist I didn’t recognize the molecule immediately. Those of you more immersed in the chemistry of naturally occurring molecules, would likely recognize Riboflavin in a second. 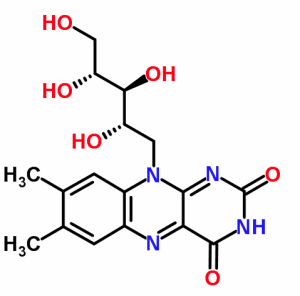 OK, so what’s Riboflavin’s significance to beer? This is where things get a little more interesting and quite a lot more complicated. In fact, even for an organic chemist it’s a little tricky. Here’s the simplified version that might strike a few chords at the organic 101 level.

Hops contain alpha-acids* that are the molecules that deliver bitterness to beer; below is a typical alpha-acid, humulone, and you can read a lot more about it in this post.

*There’s a bit of a debate about the meaning of the term ‘alpha-acid’ as it applies to humulone that I am trying to unravel. 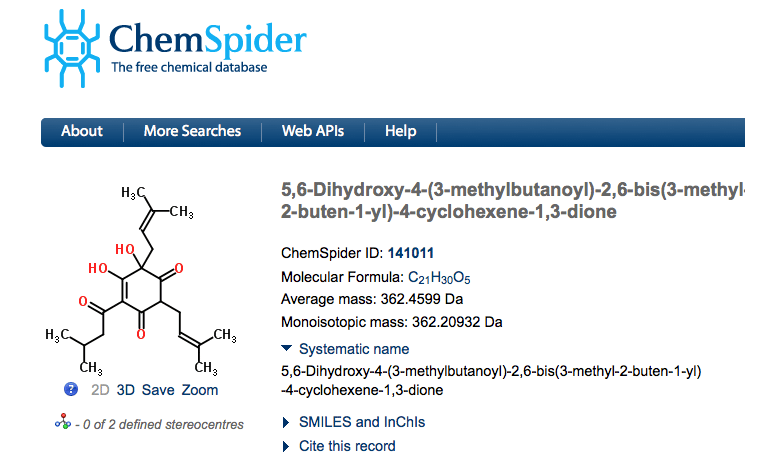 During the brewing process, more specifically during boiling, alpha-acids are isomerized into iso alpha-acids. In the case of humulone, it is converted to a combination of cis and trans isohumulone;

So what? Well, the riboflavin originates in yeast, and in a photochemical reaction (one induced by light), the riboflavin catalyzes the breakdown of isohumulones into free radicals. Free radicals are very reactive species that have unpaired electrons denoted by ●, and are formed by the homolytic fission of a covalent bond.

The 3-methylbut-2-enyl radical goes on to react with naturally occurring sulfur containing compounds such as the amino acid, cysteine,

(which provides the SH radical), to produce 3-methylbut-2-ene-1-thiol, also known as MBT.

Thiols are organic molecules that are related to alcohols with the O atom replaced by the S atom, so they contain -SH rather than -OH. Thiols are renowned for their unpleasant, stinky aromas!

MBT has a particular, special place in the hearts of beer enthusiasts that have an interest in chemistry. It is the molecule that causes the ‘skunky’ aroma in lightstruck beer. Beer that contains MBT is described as ‘lightstruck’, since all the way at the beginning of this set of reactions that produces MBT, we saw that the reaction is a photochemical one, i.e., one that is initiated by energy in the form of light. This reaction can occur when beer is stored in either clear or green bottles rather than brown bottles.