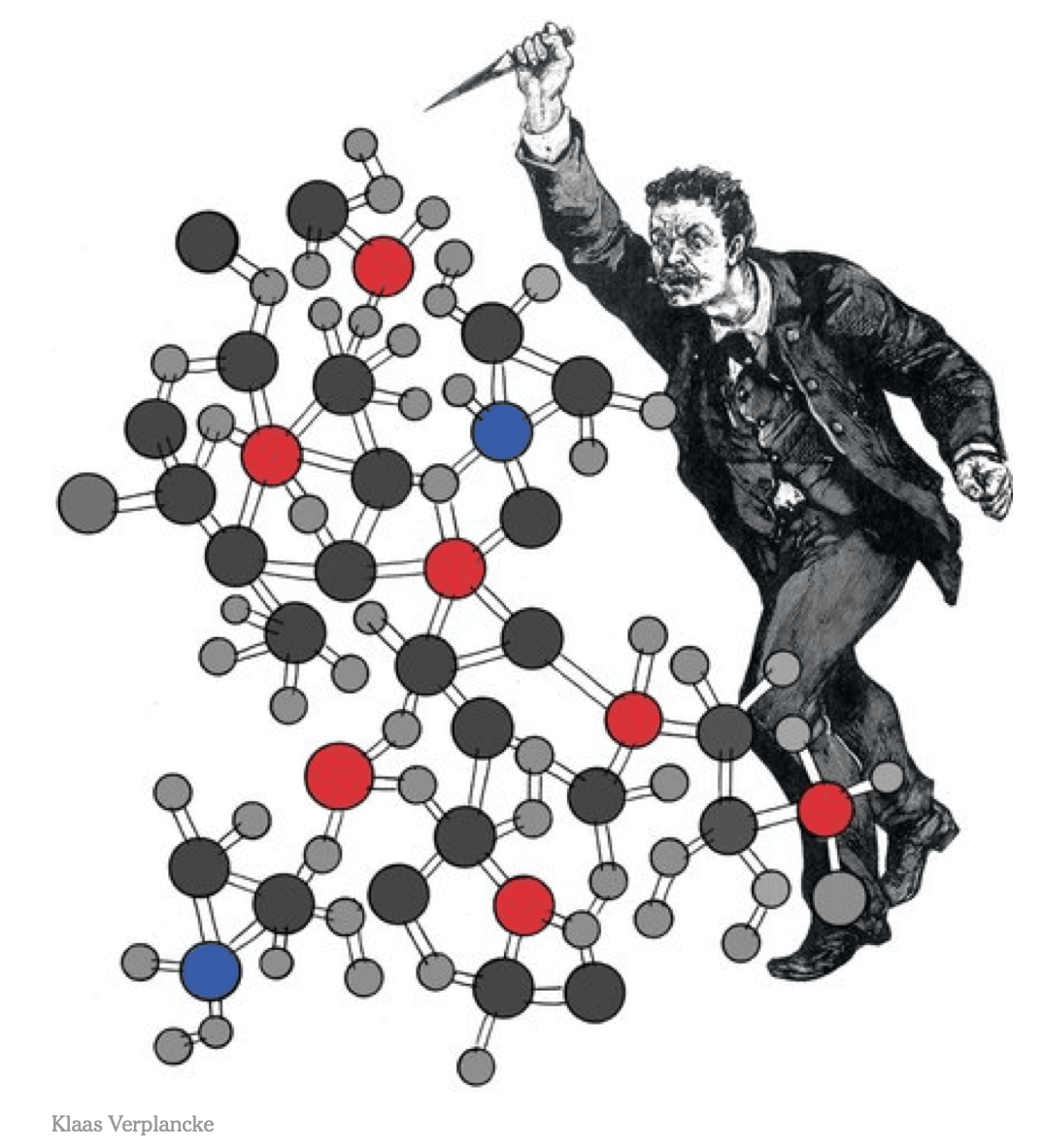 Alice Dreger (@AliceDreger) wrote a book. David Dobbs (@David_Dobbs) reviewed it in The New York Times. Klaas Verplancke (@klaasics) drew a picture to illustrate the review. Here is that picture. (I use it here without permission, but hope that everyone can be reasonable about my reproduction – please). 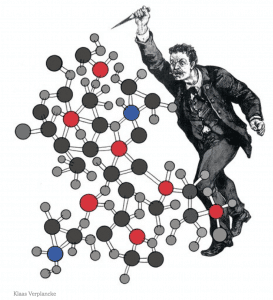 Now that I have familiarized myself with Verplancke’s work, I rather like most of it. It reminds me of the work of on the Genesis album, Duke, by Lionel Koechlin. Anyway, that aside, I’m not in love with his ‘molecule’. In fact, if it were me, I would allow the knife-wielding character to go right ahead and murder the monstrosity – or at least break the bonds of some of the impossibly overvalent (a new word that is different to hypervalency?) atoms.

OK, let’s take a closer look at the ‘molecule’. BTW – don’t worry, I’m NOT insane. I know that the molecule is totally impossible, and all of what follows is purely for ‘fun’ and I am in the habit of looking closely at molecules that I see casually depicted in pop-culture.

I am going to assume that (some of) the usual colors that appear in molecular model kits apply here, and count the larger black atoms as carbon, the red as oxygen and the blue as nitrogen. All of the smaller, (usually white but grey here) atoms I’ll take to be hydrogen. The leads us to the formula, C25H53O7N2, and it looks like everything is singly bonded.

First glances at the formula (NOT the molecule itself) reveal a couple of things;

1. That the number of odd-valence atoms is not even (53 H’s and 2 N’s for a total of 55), meaning that the molecule is not plausible, and

Disappointingly, but not surprisingly, Chemspider reports 0 matches for the formula, meaning that this combination of atoms, even with adjusted valencies that make sense, does not exist in a database of over 34 million structures. Taking that formula and assuming it to be an empirical one, then multiplying by 2 and 3, also produces no results. Chemspider also has a neat feature that allows one to take a picture of a molecule, upload it, and then an analysis takes place. In this case, not least of all because the image includes the knife-wielding madman, Chemspider reports that it, ‘Cannot load structure from the uploaded file’. Again, hardly shocking.

So what next? Undeterred, I press on, which is a rather nice illustration of my stubbornness since I know that this ‘molecule’ (as constructed), cannot exist.

OK, let’s try a double bond equivalent analysis. 25 – (53/2) + (2/2) + 1 = 0.5. What does that tell us? Well since a non-integer value for the degree of unsaturation is not allowed, and there are several rings in the structure, not much other than what we already knew, i.e., that this ‘molecule’ is total nonsense!

So let’s examine the abuse in the drawing a little more carefully.

With the exception of the terminal hydrogen atoms, nearly every atom has the wrong valency. There are trivalent hydrogen atoms, hexavalent oxygens and even a super-Texas carbon (hexavalent).

Any recognizable functional groups, correctly drawn? Errr….no, not that I can see. There is an abundance of extraordinary heterocyclic rings that I wish existed, but even those are spoiled by crazy valency. Even ignoring the atoms that are hanging off some of the rings, I think that it’s fair to say that most of them are impossible for multiple reasons, but there are a couple of aziridine rings (again, ignoring the multitude of atoms attached to those fantasy rings) that look vaguely familiar.

This is one of those bizarre depictions that really doesn’t look like was supposed to resemble anything in real life. Sometimes one finds a molecule that is just ‘slightly’ wrong, when a non-chemist attempts to replicate a molecule – this is not one of those times. Sam Mikes (@sammikes) has suggested that the ‘molecule’ represents ‘science’ which is entirely feasible if one thinks in terms of metaphors I suppose. For me, it’s beyond comprehension.

My guess is that Klaas Verplancke has zero scientific background, and that’s fine. I have no training/ability in being a brilliant artist that gets his work published in The New York Times, so in one sense we are even! If he is scientifically trained, then he has no conscience. Either way, I’d love him to illustrate a future book of mine, maybe Alice Dreger could write a dust jacket note, and David Dobbs could review it in the NYT! However, I will draw the molecules!