How To Make A Universe With 92 Ingredients, wins again. Zum Wohl!

Following the SLA Information Book Award for 2011 presented in November in London for my latest book, “How To Make A Universe With 92 Ingredients’, somewhat stunningly (at least to me), the book has gone on to win another award. 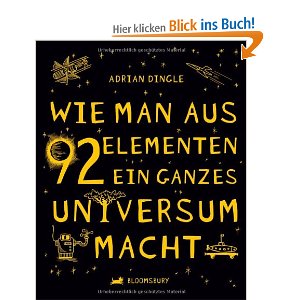 Literally translated, “Wissenschaftsbuch des Jahres’ means, ‘science/research/scholarship book of the year’, although in contemporary German language (my limited knowledge suggests that) the word ‘Wissenschaft’ often simply means ‘science’. Having said that, given that there are three other categories (Science/Technology, Medicine/Health and Social/Cultural Studies) it does suggest that the word has a slightly wider meaning than simply ‘science’ – anyway, probably more information than you need to know.

The award ceremony is in Vienna in February and I am hoping to be able to attend since amongst other things, I might get to meet one of the other winners, Bill Bryson!