Here you will find answers to some of the most commonly asked questions by AP teachers.

Some of my answers are factual, some are opinions.

If a student makes a mathematical error in an early part of a question, will they be penalized for carrying that error forward in the remainder of the question?

Generally no. Consequential errors can usually be carried forward for full credit (having lost points where the original error took place) as long as they are carried forward consistently. There may be some questions where the scoring standards do not allow this, but in general, credit will be awarded. It is true to say that the grading system is set up to award students credit wherever possible.

Do the published, official scoring standards show the only way to get full credit on a question?

This is a difficult question to answer with any certainty since, depending on the exam, the thresholds will slightly change from year to year.

The College Board used to publish these data, but stopped that practice in 2015

In recent years AP chemistry teachers have been able to crowd-source data to come up with the following grade boundaries. These are not official numbers, but can be considered very reliable. (2020 missing due to COVID)

What is the exact format of the exam? When can students use a calculator? When do they have access to the periodic table & the equations and constants sheet? 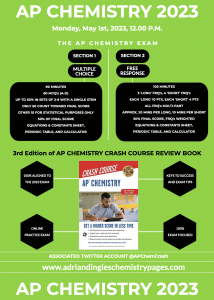 How are significant figures treated on the exam?

I have attempted to give the definitive answer to this question in this blog post. It's worth a read.

Should I have students memorize XYZ for the exam?

The answer is almost always a resounding "NO"! There are a few solubility rules required, but outside of that, NONE of the following need to be committed to memory.

Having said that, read my thoughts on memorization!

Which textbook should I choose?

It doesn't matter! It's of zero consequence. Student success will not depend upon it. I have never used one. The problem with all the texts that are usually suggested, is that they are college level textbooks with anywhere up to 80 or 90% of the pages being totally irrelevant to AP. The key to success is for individual teachers to produce their own, specifically tailored materials, similar to the ones I have developed.

Within each UNIT/topic, where should the emphasis be placed?

Not all UNITS (or even topics within UNITS) carry the same importance in terms of the exam.

For many years I have referred to "The Big Five" of Equilibrium, Acid-Base, Kinetics, Electrochemistry and Thermochemistry as being of utmost importance, but even that is a little misleading because, for example, a topic such as Bonding can permeate so many other areas.

Familiarity with the exam itself will help to elucidate which topic areas deserve more/less attention, but subscribers should take a close look at my ROADMAPS & TOP TIPS, each of which offer extensive help in this area.

How should I structure my class tests?

On all of my tests I have a multiple-choice section followed by a free-response section. Wherever possible I draw upon old AP exam questions as the source, or I clone those questions. I still write a lot of my own questions, but I am extremely careful to reflect the style, format and degree of difficulty that one might expect to find on the real AP exam. This is often not replicated very well - if at all - by textbook questions.

I never seem to have enough time to finish the course, and I find myself teaching right up until the day before the exam. How much time should I devote to each topic, and how can I ensure that I finish the course with time for review?

Generally this takes a massive amount of planning and a complete bloody-mindedness.

You MUST be realistic about the colossal amount of interruptions that take place during the year, and you MUST have an unswerving determination to stick to your schedule. Never, EVER let children dictate the pace of the class or the course. Ever.

How important are labs to AP success?

The short answer is that they are largely irrelevant, and far more importantly an inexperienced teacher can find themselves crucified by totally useless inquiry labs - take care.

For a far more extensive treatment of this question, please read this blog post,

Should I teach UNIT 7 (equilibrium) before electrochemistry (UNIT 9.7 - 9.10) ? It seems like I can't do the latter without the former

IMO it's absolutely not necessary to teach equilibrium before electrochemistry. Here's how to get around the potential difficulty.

Using that approach, all of electrochemistry can be taught without teaching the whole of UNIT 7 previously.

Should I be teaching any organic chemistry in an AP course?

The short answer is no, but there is a longer response.

It is necessary for students to understand the non-rotation of pi bonds and the geometric isomerism that it introduces. Secondly, it has not been uncommon for aspects of the course such as shape, hybridization, Lewis structures and intermolecular forces to use organic molecules to illustrate those non-organic concepts. As a result, I suggest routinely using organic molecules to illustrate the same, so as to avoid any 'panic' during the exam when unfamiliar molecules show up,

Should I always seek 'better' Lewis structures that have lower formal charges?

Unless directed to do so you may ignore formal charge, and ignore any particular rules, conventions or inclinations surrounding which atoms are connected to which others. Simply fulfill octets and duets as needed and ensure that the total number of electrons are accounted for. In the absence of other directions (which we will come on to in a moment) that means that for example, a structure for SO₂ that includes one double and one single bond to the oxygen atoms, OR a pair of doubly bonded oxygens would both score full credit. This was the case in 2007, 6(c). In other examples you could have any connectivity you choose, with any arrangements of allowed expanded octets, multiple bonds and other weird and wonderful things. As long as the fundamentals are adhered to, credit will be granted even if what you draw is not the actual structure.

1. If the question somehow asks you to consider formal charge. In those circumstances it would be appropriate (and indeed necessary) to choose the expanded octet, doubly bonded SO₂ structure mentioned above that has the "better" FC, but to reiterate, without those instructions there is no need to seek "better" formal charges on different structures. There is a really good reason for that. If one draws a Lewis structure that fulfills octets, duets and the total number of electrons, but then one decided to rearrange the atoms and the bonds in every possible way in order seek a more favorable formal charge, then every question would become an "infinite" rabbit-hole of structures. When would you stop looking for "better" structures?

Although I don't recall it coming up in the past, once again, I suspect that IF you were to construct such a skeletal structure 'incorrectly' with say, a double in a place where it wasn't needed, and if the question had made no reference to formal charge & had not forbidden such a thing, and you still had octets, duets & total valence electrons correctly assigned, then you'd likely still get full credit once more.

What I've written above is no more than me duplicating what I've said before in multiple blog posts, for example, in these from 2008.

Should I teach Molecular Orbital Theory?

Should I teach the Born-Haber cycle?

A question asking kids to construct a BH cycle seems extremely unlikely, BUT I would caution against definitely saying ‘don't teach it’ for the following reasons.

BH is no more than Hess’s law for ionic compounds, and algebra can be used in exactly the same way as for covalent compounds, it remains in my course. Also, the CB released, 2013 Practice exam had a set of five MCQs that essentially were a BH cycle. Again, not asked in a traditional way, but definitely BH! Finally, ionization energy, lattice enthalpy and electron affinity are all ‘in’, so it’s part of what I do. I couldn’t sleep without covering it.

How do I recognize a chemical change versus a physical change?

When can hydrogen bonding take place?

When a H atom is covalently bonded to either a N, O, or F atom in one molecule, the delta positive partial charge that is created on it from that connection, can then form an intermolecular interaction with some other, delta negative part of a second molecule. That interaction is a hydrogen bond.

That second molecule's delta negative atom need not necessarily be connected to H (as below, where dotted lines indicate hydrogen bonds), but equally it may be, as in H-bonding between water molecules or ammonia molecules or hydrogen fluoride molecules. 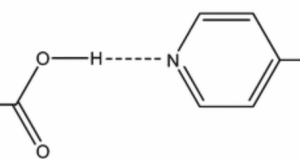 Is the C-H bond polar?

In the real world yes, but for AP purposes NO! AP chemistry considers the electronegativity of C and H to be close enough to one another so as to make the C-H bond non-polar. This renders such bonds, and importantly all hydrocarbons, non-polar.

As a guide, if the mathematical relationship (equation) does not appear on the Equations & Constants sheet, then no quantitative treatment is required, HOWEVER all of those concepts are in play in a qualitative sense.

What that means is that students should know that lighter atoms/molecules move with higher velocities at the same temperature, and that lighter atoms/molecules effuse and diffuse more quickly. They should also know how the size and relative intermolecular attractions of gaseous atoms/molecules affect deviations from ideal behavior, and how charges and their distances apart affect the force of attraction between said charged particles. For the latter two (vdW and Coulomb's), I think that knowledge of the equation format is important, so I present them. The former two I do not.