The Spirit of the Question

My recent conversation with Eric Scerri that spawned this post, was initially provoked by his article from the previous week in Scientific American. It got me thinking about an old AP exam question from 2006, that asked about the as yet undiscovered element 119. 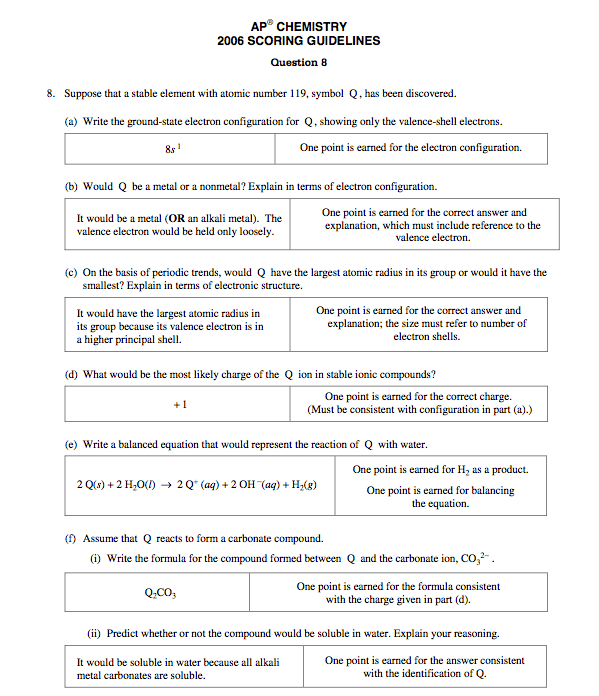 That question was incredibly easy in the grand scheme of things, but coupled with Eric’s article it got me thinking. What if it was answered by a student that knew about the relativistic effects that Eric talks of, and the whole problem had been approached from the perspective of not being able to predict ANY of the properties of ‘Q’? What if the student had written one of those infamous exam question answers that goes into teacher folklore? My answer to those two questions may not be what you think.

I like being around smart people – they make me smarter. I like being intellectually stimulated – it makes me a better, more intersting person. However, what I don’t like is a smart-ass. There’s a VERY big difference between a smart person and a smart-ass, and the smart-ass trait is a particularly unattractive one in teenagers. I’m not talking about the normal teenage angst that I experience everyday with my 14 year old daughter, I’m talking about the pseudo intellectual ‘cleverness’ that some people think they are displaying when they come up with convoluted explanations to otherwise simple questions.

‘The spirit of the question‘ is something that I’ve always been big on. Don’t over-think a problem, and don’t try to be clever. Your smart-ass comments will seldom impresses the person who is grading your answers, in fact they are much more likely to annoy them than to send them into a wonderful world of wonder, as they contemplate the fact that they never thought that a 16 year old could be so stunning brilliant!

Of course, it is true that the College Board states clearly that the AP chemistry examiners are certainly willing to give credit for any chemistry that is relevant and correct, so in theory, perhaps a discussion about why 119 would not act like a group 1 element based upon Eric’s article could potentially get credit. I LOVE reading articles like Eric’s, and I would strongly encourage my students to do so as well, but it is really important that we draw a clear line between that ‘leisure’ reading, and the business of answering AP exam questions. Simply put, my advice would be, ‘be smart, but don’t be a smart-ass’.