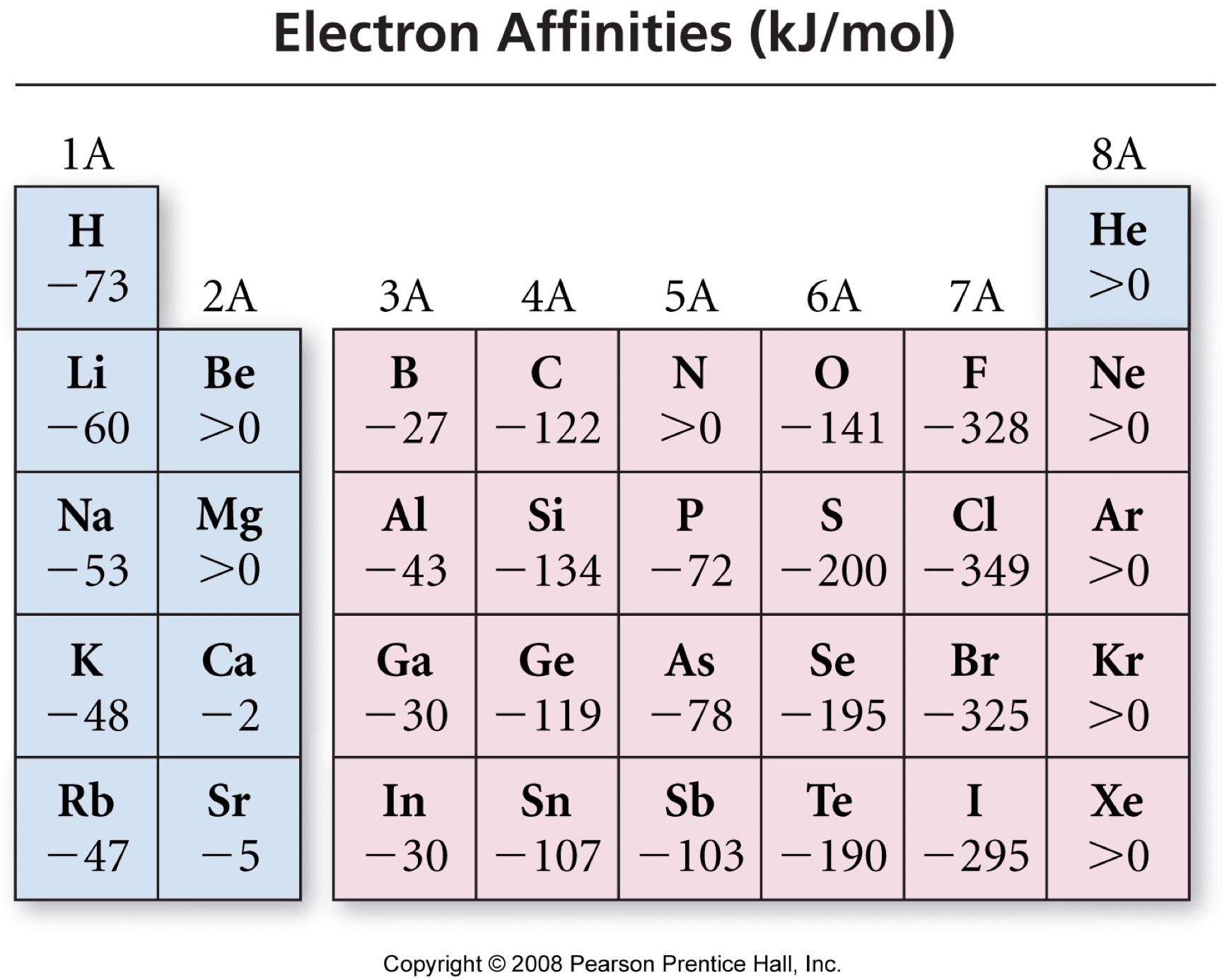 When you read my AP notes on periodicity from Big Idea 1, you’ll find a couple of popular things missing. These two things have been omitted deliberately, but I wanted to touch upon them here, just in case you run into them when looking at other resources connected to AP chemistry, or if you want a slightly fuller picture (as you should strive for!).

Since, in theory, ALL elements can accept electrons, electron affinity values can be reported for elements that typically do NOT form negative ions such as metals. This is an important note, since it dovetails with ionization energies being reportable for all elements as well, including non-metals that typically do not form positive ions.

Electron affinity used to form part of my old notes on periodicity, simply because I felt that it was on the table when it came to questions on the old exam. However, it is difficult to find an LO (potentially LO 1.9) in the new curriculum that would justify a question on it, especially when one considers the wording of EK.1.C.1c (Many properties of atoms exhibit periodic trends that are reflective of the periodicity of electronic structure), that states the following, and does not specifically mention electron affinity;

c. For many atomic properties, trends within the periodic table (and relative values for different atoms and ions) can be qualitatively understood and explained using Coulomb’s law, the shell model, and the concept of shielding/effective nuclear charge. These properties include:

As a result, currently (although as with ALL interpretations of the new curriculum none of us can be entirely sure how exactly the exam will pan out over time), I make an understanding electron affinity a low priority for my students. Having said that, if you want to know a bit more, and if you think about this purely in terms of Coulombic forces in general, here’s what I would offer when considering the data shown below.

1. Electron affinities are usually negative values, since energy is released (exothermic) when an electron is attracted by the nucleus of the atom.

2. If a positive value is quoted (for the noble gases and Be and Mg) it means that energy must be ‘put in’ (endothermic) and is generally because the addition of an electron causes a higher energy sub-shell to become occupied (which is less favorable), and hence this process has to ‘forced’ by the addition of energy.

3. Group 15 elements (5A in the table above) have more positive values than expected, since the creation of p4 and pairing of electrons is not favored since this would increase repulsion.

4. Fluorine has a smaller magnitude value than predicted by the pattern in the halogens, since, although the electron can get closer to the nucleus and therefore feel a greater force of attraction, because of F’s relatively small size and the relative high density of electrons close to the nucleus in fluorine, the incoming electron experiences some extra repulsion (when compared to Cl for example), and does not enter with the vigor that one might expect.

5. The patterns and trends in electron affinities are much more difficult to predict than other properties (e.g., ionization energies) but in general larger magnitudes are found to the right of a period, and to the top of a group.

A popular way of describing periodic trends is to use the idea of Effective Nuclear Charge (Zeff). Firstly let’s clear up what Zeff stands for.

‘Z’ is the symbol often given to the atomic number, i.e., the number of protons in an atom and therefore the nuclear charge. Zeff is the effective charge of the nucleus after the shielding effect of the electrons has been taken into account. Since there has never been a time on the AP exam where it was necessary to specifically refer to Zeff (or calculate it), I prefer to talk about periodic trends in terms of shielding/distance from the nucleus rather than Zeff, so you won’t hear me use the term much if at all.

In its crudest form (and it actually much more complicated than this), the Effective Nuclear Charge can be calculated by taking the number of protons, Z, and subtracting the number of non-valence (inner or core) electrons, S.

So, for example, for fluorine the Zeff value for the last electron to enter a F atom is 9-2 = 7. In reality it is more complicated, with the need to invoke Slater’s Rules, but that is WAY beyond AP!