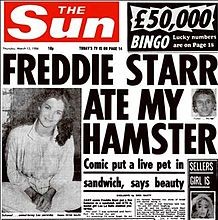 At least one member of the AP Chemistry Test Development Committee (TDC) has described this blog as no more than, in his words, a ‘tabloid’. I’m not quite sure what he means by that, but presumably it’s an attack on me because he perceives that what I write here to be somehow invalid, or perhaps sensationalist.

Nothing could be further from the truth, and it exposes a deep misunderstanding about me and what I am trying to achieve in my exposure of the mess that is currently AP chemistry. If I wanted sensationalism I’d go for something more akin to The Sun, and perhaps start reporting on the eating habits of 1970’s/80’s celebrities.

So, back to the matter in hand.

This post is about the two AP sessions (that basically turned into a single session) held at ChemEd 2015 on July 31st, and the questions that I feel were not answered.

During opening remarks, Harvey Gendreau described some of the discussions regarding the 2015 AP chemistry scores that had taken place on the AP chemistry forum as, ‘downright nasty’, and he highlighted the large changes in grade distributions by using Total Registration stats from recent years. He suggested that we (AP chemistry teachers) are being ‘short changed’ (his words), and that the CB has some, in his words, ‘splaining’ to do. I agreed, and so did many in the room judging by the nodding!

Harvey’s remarks were followed by a two and half hour presentation by Roger Kugel (Chief Reader, AP chemistry) and question and answer session with Paul Price and Dave Yaron from the TDC. (I’m beginning to think that Jamie Benigna does not exist, since he was originally advertised as being at ChemEd and he has failed to respond to umpteen emails that I have sent him over the years).

Kugel’s presentation of the 2015 questions and answers from the released exam provided very little that I didn’t already know, but there were a few nuggets that were of interest to me. Below I have highlighted some things that I think are worth repeating.

My original calculation of the national average AP chemistry score of 2.61, was based upon the previously released number by the College Board of 150,000 test takes. With the new numbers, the math determines that the actual national average is 2.609, which is actually slightly worse than the original numbers posted by the College Board would suggest! Here is my Tweet of July 6th that gives perspective over the last 14 years (with the original number that I calculated for 2015 still shown). 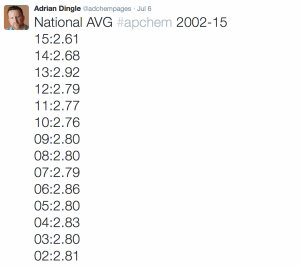 But for me perhaps the most important thing that was confirmed from the exam discussion part of the presentation, was something that ‘we’ have suspected right from the beginning of the new exam. Because Kugel said time and time again that the way to improve student performance was to get kids to practice writing out their answers, it is absolutely crystal clear to me that there has been a shift in emphasis AWAY from chemistry, and toward English skills. There can be no doubt about this IMO. On multiple occasions he stressed the need for careful reading of (the increasingly esoteric) questions, and time and time again he said that kids should be practicing writing out their answers longhand during their AP courses.

In addition, some of the anecdotal evidence that has starting coming in on the AP discussion group about the relatively poor performance on the exam from kids who have English as a second language, categorically backs this up. In short, communication is now a bigger part of the AP chemistry exam than it ever has been in the past, and chemistry has been de-emphasized in relative terms. In the past, if you knew your chemistry then that was enough, that is categorically no longer the case IMO.

Moving on to comments about score setting and the catastrophic decimation of the number of 5’s awarded in the new exam.

Essentially, there was the usual smoke and mirrors conversation about statistics and the questions that appear from year to year that act as ‘equaters’ that help to set the score boundaries, but the central question remained unanswered;

What agenda does the College Board have, that would justify the scores plummeting as they have, when the chemistry on the new exam is getting no more difficult?

That question remains unanswered as far as I am concerned. This despite the fact that I fully understand that subsequent exams are compared to the first new one (2014), and not earlier exams, and that ‘equater’ questions (those that appears on multiple exams) are used for comparison. Those conversations do NOT explain why essentially the same group of kids, with an exam that has no, more difficult chemistry on it, has resulted in the number of 5’s being cut in half. I’m not a conspiracy theorist in general, but I am a believer that agendas have been set, and that action is now being taken to artificially reduce the number of 5’s on the AP chemistry exam. One person in the room described the new situation as, ‘The May Lottery’ – I feel much the same way. For me there IS an answer, and that it is linked to external bodies believing that English communication skills are perhaps as important as chemistry – that makes ZERO sense to me on a CHEMISTRY exam. I think it stinks.

Here are a few highlights from Roger Kugel on the scoring setting process, and on the decisions about which schools get alternative exams.

All in all I felt a bit sorry for him – really I did. He looked a little tired of questions that he clearly has no answers for. He is clearly almost completely out of the loop when it comes to score setting (something that I already knew), but how can this be right? How can the single most important person in the country in terms of the CHEMISTRY of AP chemistry exam, have such a non-existent role in score setting? It makes no sense.

There then was the (what turned out to be bizarre), ‘Letter of Explanation’ saga. It’s just another example of the right hand not knowing what the left hand is doing at The College Board.

Paul Price announced that Trevor Packer had written a letter that went some way to outline why the massive grade re-distribution and he suggested that we contact Serena Magrogan to get a copy. It then turns out that Trevor had not written such a letter, rather that Serena had, but it is not supposed to be posted in the public domain. Why not?? We ALL need to see this letter regardless of whether we are getting heat from stakeholders about the new scores. I’ve seen it, wanted to post it here and also had my links to it removed from the AP forum. Why? It largely says nothing of substance but the question is, why the bizzaro secrecy? We ALL need to have this information in the public domain. The College Board just gets odder and odder.

The bottom line is this. If I could drop AP chemistry from my school’s curriculum, I would. I believe that I can achieve two things, independently of the College Board.

One, I can deliver a higher quality advanced chemistry course than the AP chemistry curriculum now requires and in the process move away from an emphasis on NON-chemistry skills – this I feel is REALLY important to chemistry education going forward.

Two, I would not have to put up with the frankly increasingly odd behavior of The College Board. From the audit, to the curriculum changes re: oxidizing and reducing agents/Lewis acids and bases/phase diagrams etc., to the move away from chemistry skills, to the weird and secretive behavior regarding score setting, it’s all getting a little too peculiar for this AP chemistry teacher.