This week I got my hands on the booklet of 10 Free Response questions released by Flinn, as examples of questions that we might see on the new exam. Normally such a booklet would hold little interest for me, but with such a massive dearth of new material published by the College Board, any vacuum filling by third parties is likely to attract my attention, even if for no other reason than me collecting data.

These questions are obviously the intellectual property of Flinn, so I cannot reproduce them here, but I certainly can give my opinion. What follows is a combination of my own thoughts, and the thoughts that came about as a result of a 30 minute conversation that I had with Mike Marvel at Flinn, the co-author of the questions. Flinn asked me NOT to reproduce my full answers to the questions here, and in the short term I agreed (out of a courtesy to Mike and because Flinn have been good to me in the past), but the more I think about it, the more I am unhappy with their request. They don’t hold the IP in relation to my answers, so I may re-think this, however, for now, my answers will remain out of the public domain; in the fullness of time, I expect that to change.

Anyway, here are my thoughts, question by question. Obviously to make sense of this you’ll need to have seen the questions themselves.

Question 1: The use of a molecular anion to talk about polarity and VSEPR is a bit odd in relation to the manner these questions have been asked in the past, but I think it’s absolutely OK to do so.  I didn’t really know what Mike was expecting in part b., and I initially thought that a comment like, ‘oxygen, via its electronic configuration, has the ability to make sigma and pi bonds that fluorine does not’ would be OK. He sees it differently, thinking that an explanation in terms of electronegativity would be better. I must admit, I’ve never thought about this before, but I think that Mike sees it like this; the greater the difference in electronegativity, the more the ionic the bond. OK, fair enough, but the extension of the thinking here is something to do with the idea that with greater ionic character (i.e., greater charge separation), comes a larger distance between charges, and hence a longer bond. I (not Mike), then characterized an ionic bond as an ‘infinitely long covalent bond’! I’m not quite sure that I understood Mike completely, but that’s what I took away. Either way, if this is a representative question in terms of ‘explanation’ on the new exam, I think that the readers are in for a VERY hard summer!

Question 2: Part a. is straightforward, and so is the first part of part b., but ‘explaining how CO2 fits the quantum mechanical model’ seems like a recipe for all kinds of convoluted, bizarre explanations and to me it is not clear what a question like that is expecting. I came to the conclusion that becasue there is a double bond present, we have to be talking about sigma and pi bonding, which in turn means that we must be talking about different types of orbitals, which in turn suggests a more complicated approach than the simple, electron-shell, ‘solar system’ model will allow! Again, I’m not sure if that would cut it on Mike’s scoring scheme but that’s all I have for that answer.

Question 3: I think that part b. should be re-worded since it’s not clear to me what the question is asking. I think that the word ‘ratio’ needs to be inserted somewhere. In part c. there is a typo. Mike tells me that it should have said 10% ionized. However, becasue of the typo, I initially thought it was a clever way to see if the kids would realize that becasue the ionization was so small (it actually says 1% and asks kids to draw no more than 10, acid molecules), that they avoid any molecules being dissociated in their diagrams. Overall, I think that Question 3 represents a pretty good way to assess the kids understanding of a weak acid equilibrium, without asking the calculation heavy questions of the past. In that respect, it might be a really good example of what is coming. I of course prefer the calculation questions, and for now I am taking the view that by working the old, calculation heavy questions during the year, and then seeing the type of question that might come, my students will get a good feel for what they might see in May.

Question 4: Net ionic equation writing lives on! Well, at least a little, and I think it is reasonable to assume at this point that we can still expect a smattering. I think that the answer to part c. is anticipated to be in terms of a solid obscuring the observation of an end point, but for me, a better answer is that under different conditions an entirely different, competing reaction is set up that screws up your assumptions about the reacting ratio between the oxidizing and reducing agent.

Part e. is problematic to me, but I suppose it could be the type of thing that we see on the new exam. Mike wrote this question since this was something that he actually experienced in the lab. When I read it I tried to think of explanations in terms of charge density, bond length and strength, and a bunch of other, clever explanations. Mike tells me he was simply expecting answer that said the bulky butyl groups get in the way of the N atoms reacting. OK, I get it, but I think many really able kids are going to over analyzing this type of question that could hurt them. 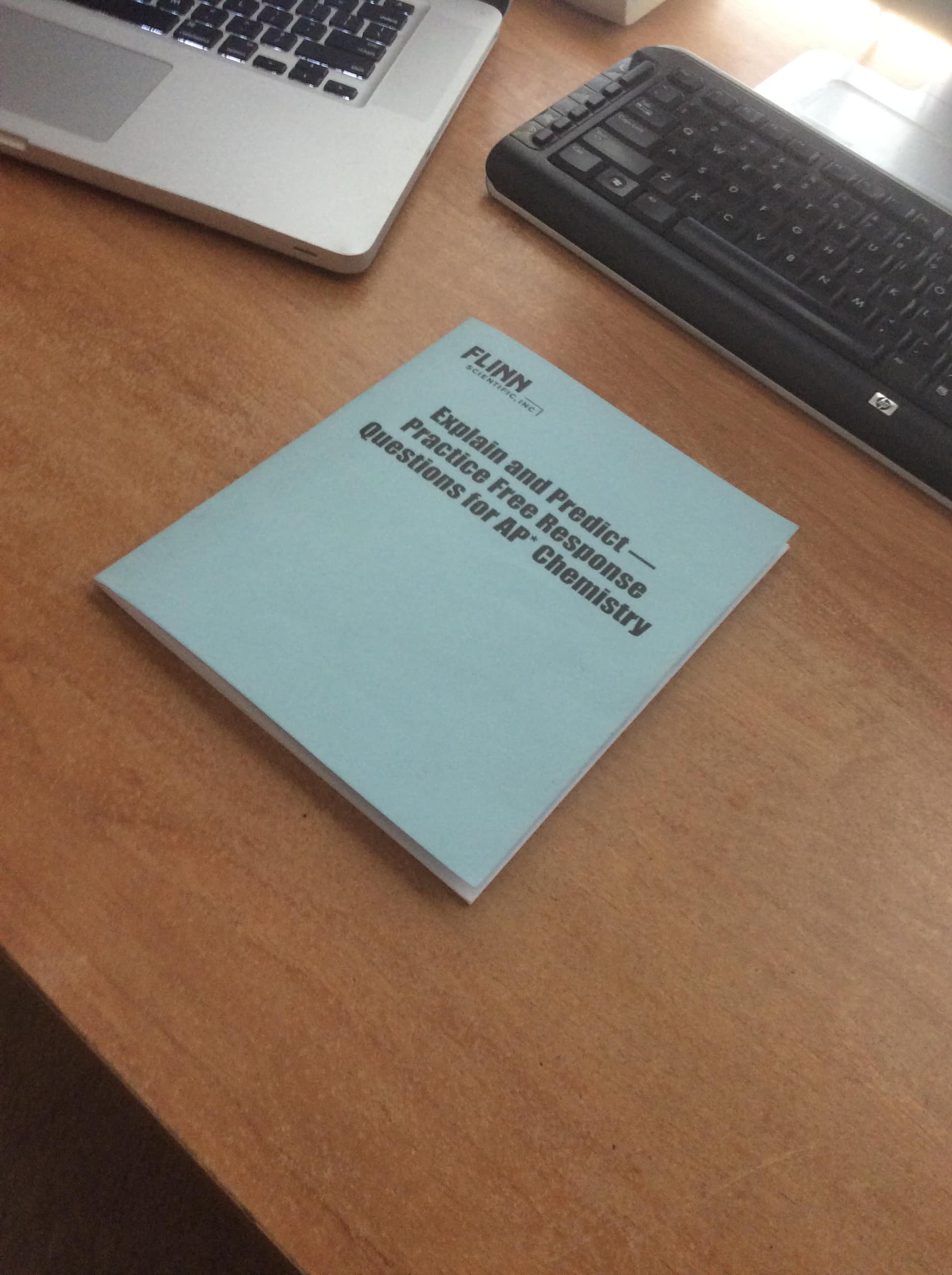 Question 5: This question just reinforces my thought that if you want to test a lab situation then you HAVE to have a lab exam. There’s nothing wrong with this question per se, but if anyone thinks that a comprehensive lab program of inquiry is necessary to get a great score on this question, then they are nuts!

Question 6: The same comments about question 5 can be applied here. Part a.i is typical of the new, particulate thinking, and I think requires a comment about the particles actually physically bumping into one another with kinetic energy. The answer to b.ii is kind of given away in b. iii IMO, and the answer to part c. leads to a bizarre value for the SHC of a metal. It might be better to re-work the numbers in part c. to bring them into the realm of reality.

Question 7: More particulate diagrams in a., but b. might be a disaster to grade. Mike was thinking an accumulation of solid in the bottom of the beaker and I was thinking a milky white suspension. Same thing of course (at least ultimately after settling), but I don’t want to have to grade these questions!

Question 8: Part a. might phase some students since it is so simple, and part c. WILL yield a quadratic if you fail to realize that the value of  Kp suggest that the degree of dissociation is very small, and x can be neglected. This is a REALLY interesting point for me. I think that kids are usually well-conditioned to neglect x in weak acid/base situations, but that they would not necessarily think to do so here (since it’s not a weak acid or base question). Hopefully, my own students would know that the formation of a quadratic would require a re-think. Having said that, solving with a quadratic will still give you full credit, so does it matter at all? Parts d. and e. look like classic questions where the CB will expect a Q versus K explanation and essentially they are the same thing. I expect that to be a feature of equilibrium questions in the future. Part f. has more particulate thinking.

Question 9: Part c. is the thing I am not familiar with. I guessed the correct answer (i.e., the opposite voltage of a.), but I’m not sure what LO this comes under. I know we have to get Delta G to a least 0 (or negative), but I don’t think I have ever considered the specifics of the voltage used in the electrolysis situation. The idea of over-voltage has never been asked on the AP exam, nor has the concept of electrolysis requiring the opposite of the negative voltage in the cell, so any understanding being required here is unlikely, but I’d still like it explained to me!

Question 10: This question is based upon the lab that I wrote in the CB lab manual, but again, not an experiment that one would have to have done in order to get all of the point. Again CB, lab exam!

In summary, some useful questions form Flinn, and with a few lab references, explanation dominating calculation in places where the latter used to prevail, and some particulate references, a pretty good attempt to capture the spirit of the new exam in the absence of the College Board providing more. I have no problem with ‘off the wall’, ‘lateral thinking’ type problems per se, as long as they are few and far between, and represent a tiny portion of the points. However, I would NOT want to grade those questions!